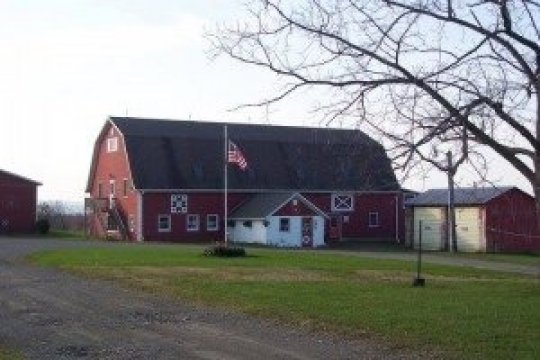 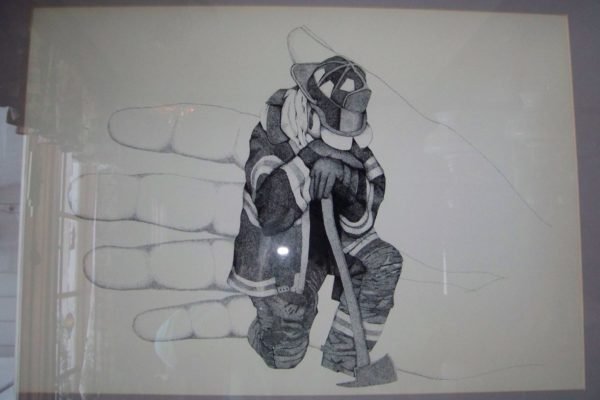 Isabelle Gernatt Schmitt owns and operated the Quilt Farm. She has been sole proprietor since 2001 and one of the original partners for 20 years. Isabelle is the middle child of 13 and the 2nd daughter of John and Eleanor Gernatt of Collins Center, NY. Widow of Eugene H Schmitt of Boston.
Barn Story: Our barn was built in 1939 from lumber cut and sawed on the property. The head carpenter was Neal Ahles, of Springville, NY. His helper was Leo Spangler. The beech and hemlock logs were cut in the backwoods and dragged to the building site by a team of draft horses in March of 1939. The barn was built that July. It measures 70’x 30’ and is about 35’ high at the peak. The barn was used as a dairy barn for 39 years for the Schmitt family. At the peak of operation, the barn held 46 Holstein cows and 16 calves. At one time or another, the barn also housed a chicken coop and a grain bin. Sylvester Schmitt operated the farm from 1939 to 1965, when his son Eugene H. Schmitt took over. Eugene operated the farm until his death in 1978 in an accident as a volunteer fireman. The dairy cows were then sold, and the barn sat empty for 12 years.

In 1989, Eugene’s widow, Isabelle, had the ground floor of the barn remodeled to be used as a retail fabric and quilt shop, owned and operated by her and her sisters, Christine North and Eleanor Hebdon. It took Eleanor’s husband, a contractor 2 months to finish the ground floor. He removed the concrete floor and put in a wooden one. Leaving the barn walls in-tact, a modern studded wall was added. Now the outside walls are about 12’’ thick and contain the original wall. The Quilt Farm opened in June 1989. In 1994, the second floor was remodeled and opened in September. A similar technique was employed, building a wall within a wall. The original hay-loft hardwood floor was the original barn that is visible from the quilt shop. The upstairs has 10’ ceilings so that quilts can be displayed hanging full. It has a large display area and a one-bedroom apartment. A third floor was created which remains unfinished as a storage area. The barn looks very modern now. Vinyl siding and a new shingle roof outside and sheetrock walls and suspended ceilings inside mask the original barn which remains as a shell. If you remove a panel of the ceiling downstairs, you will still see the white-washed beams of the original dairy barn.
The barn sits near the top of a hill 25 miles southeast of Buffalo, NY. From its new picture window near its peak, it gives a commanding view of the surrounding countryside. To the northwest, you can see Lake Erie, and you can make out the Canadian shore on the far side on a clear day. To the southwest, you can see about as far as Perrysburg, about 25 miles away.